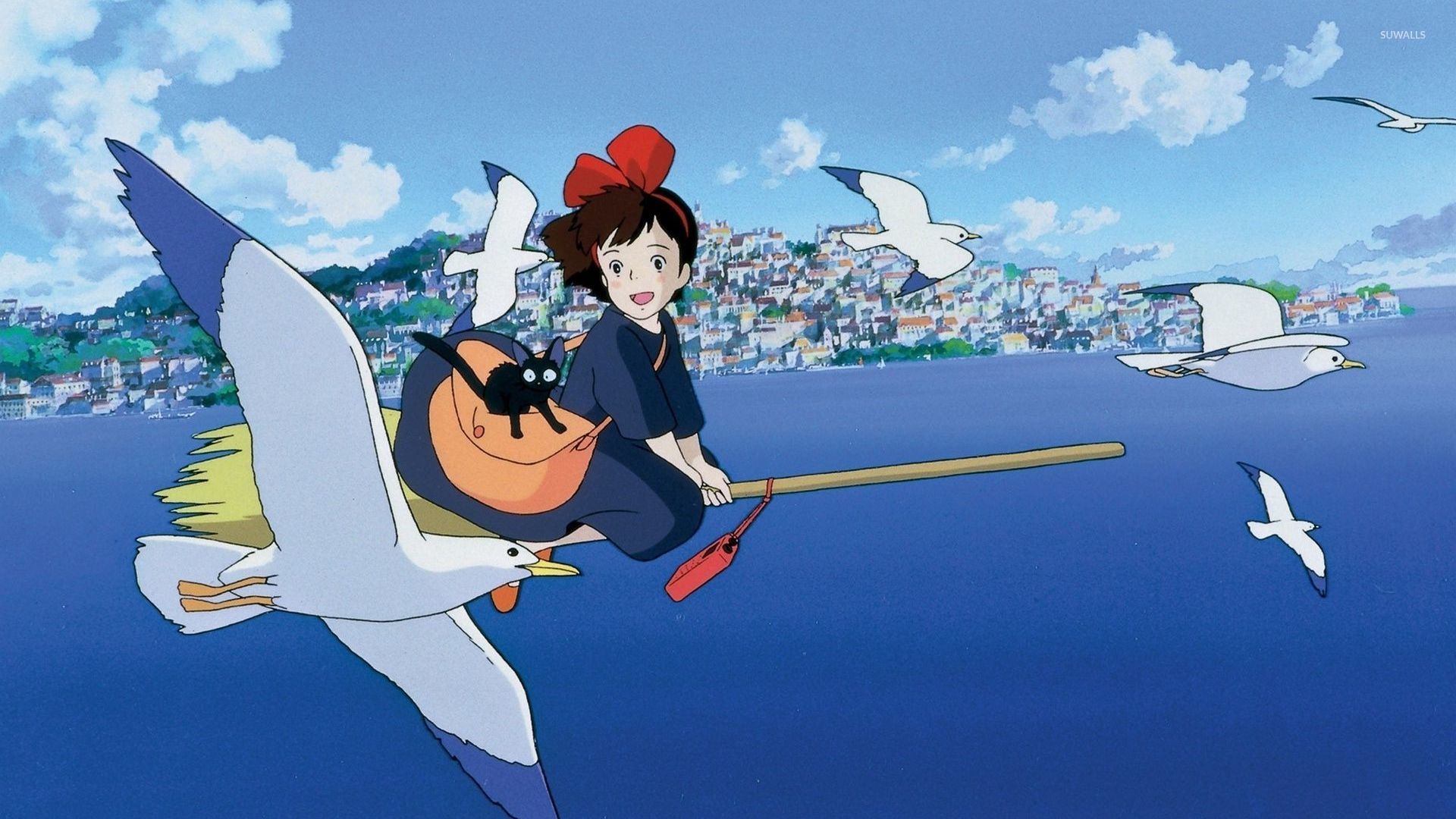 Kiki’s Delivery Service is a film about a young witch-in-training named Kiki who must leave her home to hone her magical skills.

Kiki struggles with finding her place in a new environment, but ultimately begins to run a delivery service by flying around on her broomstick. The film was animated by Studio Ghibli and released in Japan in 1989 before being brought to North American viewers through a partnership with the Walt Disney Corporation in 1998.

I first saw Kiki shortly after the film was released in Canada on home video, and it has only resonated more strongly with me upon re-watching it at later points in my life. After watching the film with my graduate student cohort, many of them remarked: “this is just like my life!” Kiki’s Delivery Service is one of my favourite career development films, as it represents the struggles of young professionals and the entrepreneurial skillset they need to succeed in an ever-changing world of work.

Kiki knows she wants to live in a town by the ocean, but has no clue what she wants to do when she gets there. In her world, witches focus on honing a chosen skill, such as potion-making or fortune-telling, and bring that service to their new place of residence. Kiki finds her perfect ocean-side town, but is unsure what skills she can bring to it.

Kiki feels that her “only real skill is flying,” but is unsure how to use that skill to the benefit of others. A chance encounter has her fly off on her broom to return a lost item, and after some chance endorsement, she decides to run a flying delivery service.

Kiki’s struggle of finding her talent is one that is familiar to anyone who has had trouble identifying what their “passion” is. Young people are often told to “follow their dreams” for their careers, but this can be difficult advice to follow if you feel like you aren’t really good at anything.

Being an Entrepreneur and Embracing the Gig Economy

Kiki’s flying delivery service only effectively takes off the ground (pun intended) due to sponsorship from Osono, the friendly baker she encounters after landing in the city. Osono helps Kiki come up with the business idea, provides her bakery as a base of operations, and the use of her telephone. From there, Kiki begins to build up her clientele and make deliveries around the town.

Kiki learns how to adapt her skillset by embracing the gig economy and launching her own business, much like how more young professionals today are adapting to a gig-based economy or choosing to start their own businesses.

Flying used to be just for fun for Kiki, but now it’s work – she begins to feel burnt out from being overworked, and from her clients not appreciating her work. This manifests itself in Kiki losing her ability to fly. Kiki’s loss of her skill causes her to doubt her ability to succeed, prompting her to take time away from work to focus on her own self-care. The time that Kiki spends focusing on her motivations and inspirations effectively helps her to be able to fly again.

Kiki’s loss of her flying ability and self-doubt stresses the importance of young professionals focusing on their mental health, particularly when navigating transitions in their career. The precarious and demanding nature of gig or entrepreneurial work can have impacts on one’s mental health, and young professionals need to have resilience strategies to successfully adapt to the challenges that the changing world of work brings.

In the 30 years since its initial release, Kiki’s Delivery Service remains a relatable story of a young professional finding her place in the world of work. I highly recommend the film not only for the stunning animation, charming characters, and excellent English voice cast (including Kirsten Dunst, Phil Hartman, and Debbie Reynolds), but for a personal tale of finding passion and purpose that can resonate with anyone. The lessons shared from the film are perhaps even more relevant now with a labour market where young professionals are increasingly turning towards entrepreneurial or gig-based work.

What are some of your favourite career journey stories that you’ve seen in movies, books, or television? How have they inspired you in your own career journeys or practice?

The Career Development Bookshelf: “No One is Unemployable”

Program Development, Evaluation, and Professionalism: Core Competencies, Areas of Specialization, or Something Else?

Scenes from a Norwegian Symposium: Nine Lessons from Twenty Years of International Collaboration